One of my favourite Victorian paintings is a bit of a standalone in that it is not made by one of my favourite painters. Don’t get me wrong, Frith is certainly a great talent, and works like The Railway Station certainly deserve some extended gazing. But I simply love A Private View at the Royal Academy, 1881 for reasons that might be obvious to those interested in the subject of this blog; but also simply as a Victorian fangirl – oh to be amongst that crowd!

Frith has included some truly wonderful examples of Aesthetic Dress, which were all the rage at the time of painting, 1882-83. One of the main problems I am addressing in my research are definitions of these classifications of dress, particularly between Artistic and Aesthetic Dress, which are often used interchangeably. Without going in to too much detail just now (I’ll save this discussion for a longer entry later), I’ll simply state that I think Aesthetic Dress ‘happens’ in a very specific time and place, logically during the period when Aestheticism was a popular trend, roughly 1870-85 (and I do mean roughly). Frith’s painting records this, and it was one of those ‘must include’ examples in my research. There is a well-repeated quote from Frith’s biography that he made this painting specifically to record the ‘aesthetic craze’, but I was interested to read the longer account of it in his Reminiscences (1888):

Seven years ago certain ladies delighted to display themselves at public gatherings in what are called æsthetic dresses; in some cases the costumes were pretty enough, in others they seemed to rival each other in ugliness of form and oddity of color. There were – and still are, I believe—preachers of æstheticism in dress; but I think, and hope, that the preaching is much less effective than it used to be. The contrast between the really beautiful costumes of some of the lady habituées of our private view and the eccentric garments of others, together with the opportunity offered for portraits of eminent persons, suggested a subject for a picture, and I hastened to avail myself for it. Beyond the desire of recording for posterity the aesthetic craze as regards dress, I wished to hit the folly of listening to self-elected critics in matters of taste, whether in dress or art. I therefore planned a group, consisting of a well-known apostle of the beautiful, with a herd of eager worshippers surrounding him. He is supposed to be explaining his theories to willing ears, taking some picture on the Academy walls for his text.[1] 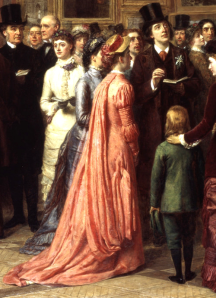 That ‘apostle of the beautiful,’ seen in the foreground at centre right, is of course Oscar Wilde, who in 1881 was a new neighbour to James McNeill Whistler & Dante Gabriel Rossetti in Chelsea. By the time the painting was displayed, however, Wilde had already conducted his lecture tour of America in service of Gilbert & Sullivan’s satirical operetta Patience, which famously lampooned Aestheticism (which was unfamiliar to Americans, thus Wilde was sent to ‘educate’ them, ostensibly so they understood the farce). Frith surrounds Wilde, who is still in his bachelor days, with adoring ladies who seem to hang on his every word. The gathering would have no doubt caused Wilde’s more sceptical critics to chuckle when it was displayed in 1883. 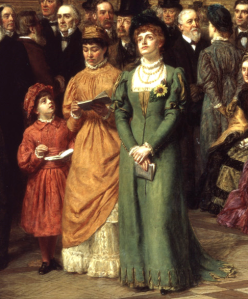 Frith’s painting echoes the kind of reportage seen in fashionable magazines of the day, which catalogued in great detail the clothing seen at social events like private views.  In addition to capturing a quintessential gallery opening, Frith achieved his goal of ‘recording for posterity the aesthetic craze as regards dress’ by rendering three excellent examples of ladies’ Aesthetic Dress, which were surely painted from life (more on this below). At left, two ladies are presented in green and ochre (along with a child in an earthy orange dress with matching bonnet), all natural colours lauded in Aesthetic circles. The woman at left wears a golden ochre gown shaped by loose pleats, and styled so that it is gathered up to reveal an ivory ruffled satin underskirt. The green dress worn by the woman at right is a nod to a more medieval style, with sleeves that are puffed and slashed at the top then tight to the wrist; a low, square décolletage over a high-collared chemise; and a long, comparatively straight skirt with a castellated hem. Her dress is accessorised with a sunflower to match the gold trim, and she wears a dark green velvet beret-like cap.

One of Wilde’s admirers wears the third and perhaps most unique of the dresses. Seen from the back, it employs a Watteau pleat which, rather than trailing over the long train of the Princess-line gown, is looped up through a strap that cleverly buttons to the side of the skirt. The sleeves are ruched above and below the elbow, and loose at the shoulder and elbow, which is both pleasing to the eye and functional in providing freedom of movement. The gown is otherwise unadorned, the warm salmon tone and the draping of the fabric itself providing the only ornamentation.

In placing these unique gowns side by side with more traditional Victorian ladies’ dress, with their hourglass corseted figures and pronounced bustles, this painting demonstrates the differences between mainstream and Aesthetic fashion that would cause further debate in the 1880s. As well, Frith hints at the mounting strain within the artistic circles themselves. Wilde is dressed in an earthy brown suit, much like that of Leighton (who stands at the very centre, his back to us), but he has a signature lily tucked in his buttonhole as a nod to his Aesthetic tendencies. He does, however, also wear a silk top hat like many of the other proper gentlemen (an item he would later criticise), perhaps most notably like the older, more conservative John Everett Millais (at far right). We cannot read too much into Wilde’s placement midway between Leighton and Millais; although Leighton became the President of the Royal Academy in 1878, Frith wasn’t to know Millais would be his successor, even if briefly, upon Leighton’s death in early 1896 (Millais died later that year). However, Wilde’s costume as rendered by Frith, and as well Frith’s intention for representing him as noted above, seems to almost foreshadow the coming debates of the mid-1880s Wilde would engage in, very publicly, with Whistler on dress and the arbitration of taste. Furthermore, Frith’s comments in his autobiography, made in 1888, echo Whistler’s jibes at Wilde (though he didn’t call him by name) made in his famous Ten O’Clock lecture in 1885.

In his Reminiscences, Frith also includes comments on his experience with a model, Jenny Trip, in his recollections of making this work, who he employed to pose for one of the aesthetic ladies. He states that he was not a great employer of models, and only did so for the aesthetes, which reveals that although the more famous people sat for him, he did not recruit ‘actual aesthetes’ for these figures, but composed them himself. I found the exchange rather engaging, and thought I might repeat it here:

Miss Trip was a trial to me. Never did she ‘come to her time.’ Her conversational powers were nil. Nothing that I could say seemed to interest her in the slightest degree, and, unless I spoke, silence reigned. She had a pretty, pensive face, on which a smile seemed as much out of place as it would be on the face of a mute at a funeral. This most provoking smile was more especially irritating when it was the only reply to a terrific scolding.

‘What is your father?’ said I to her one day, when she came into my studio two hours late.

‘He is a stoker on the Chatham and Dover line.’

‘How early does he get to his work?’

‘He goes out at five in the morning.’

‘Indeed,’ said I; ‘and his daughter—that is you—cannot get to your work by ten. You ought to be ashamed of yourself.’

Not a word of excuse. She smiled. I made a mental vow that, once the æsthete was finished, my acquaintance with Miss Trip should finish too. That happy moment came at last; there was but little to do, and for that little my smiling friend was not absolutely necessary.

‘As you find it impossible to get here by ten, perhaps you can come at two to-morrow?’

She said she could, and smiled.

I then told my servant that unless the young lady was within a quarter of an hour of the time fixed, she was not to be admitted.

I allowed two o’clock to pass, and at three, my servant happening to come into my room, I asked after Miss Jenny Trip.

‘She has just been, and gone again, sir.’

‘What did she say when you told her you had orders to send her away because she was after her time?’

It is probably wrong of me, but after that tale, I find I rather like Miss Jenny Trip.

You can read Frith’s recollections of painting ‘The Private View’, and the rest of his Reminscences, at archive.org.