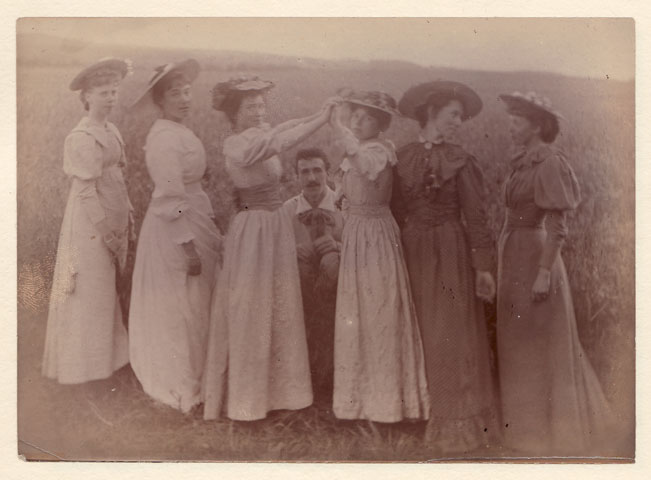 One of my favourite items in the Glasgow School of Art collection is a photo album of ‘The Immortals’: a group of friends studying at the Art School in the 1890s, and whose artistic interests can most clearly be scene in their wonderful group effort ‘The Magazine‘. Their interest in Symbolist art and faerie tales is very clear (see example below), and in her 1990 book Glasgow Girls, Jude Burkhauser suggested that the self-styled moniker of this group may have been inspired by Celtic mysticism (pp.49-50).

Burkauser also suggested that these women artists calling themselves ‘The Immortals’ might reference the kind of posterity usually reserved for male artists of the academic variety, which very few females got to enjoy. But looking at the photo album, full of pictures of the women on a day out in the Ayrshire countryside with a few of their male companions, one might simply think that their being Immortals might just be down to that youthful feeling of invincibility – and what happens when such carefree moments are captured in a photograph to be shared in an unknown future (even via a form of technology they could not yet perhaps dream of).

The album is comprised of a group of photos of the friends enjoying a sketching weekend at ‘The Roaring Camp’ in Dunure, the home of John Keppie (Mackintosh’s boss – an important point shortly). Perhaps the most well-known photo from this album is the one at the start of this post, of the women standing three and three, with the twenty-something Charles Rennie Mackintosh poised between them. He is not the usual focus of discussion in this image, however; that is reserved for the interesting exchange between the two women at far right: Jessie Keppie, John’s sister, and Margaret Macdonald. And the portrait often painted of the moment is not altogether flattering:

‘There is an astonishing vivid and frank expression of the fraught relationship between Jessie and Margaret caught in one of the photographs taken in the mid 1890s… Jessie Keppie, standing second from the right with her fist held provocatively, turns to confront Margaret Macdonald. The smaller Margaret stands her ground and stares back. It is not without a frisson.’ – William Buchanan, Mackintosh’s Masterwork, The Glasgow School of Art, p. 8. 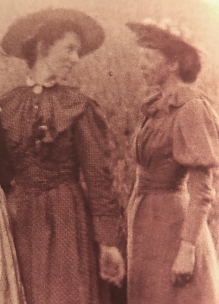 I have long been bothered by the characterisation of Jessie Keppie and Margaret Macdonald as being at odds in this photo. To my eye, the two women gaze at each other in familiarity, and although the image is even hazy in person, one can see that they are exchanging an amused glance. Keppie’s hand is not in a fist as the quote above suggests, but in an open-palmed gesture towards her friend. What is it that has made others have such a negative reading of this image?

Unfortunately, this interpretation is down to a rumoured love triangle between these two women and Mackintosh: he was once reportedly engaged to Jessie, but of course later married Margaret in 1900. It has been assumed Charles and Jessie were betrothed during this period, and he is seen next to her in some of the photos, such as the one below where he seems to steady her arm with his hand. But one might argue that this was merely gentlemanly: we also see McNair at the other end, holding hands with both Macdonald sisters (though he does eventually marry Frances in 1899), and in fact all the group seem to brace each other on the possibly precarious stone wall. But because of the story of the broken engagement, some have surmised that the aforementioned photo must show the tension between two woman at war over the love of the charismatic man at centre.

William Buchanan is not the only person to view that image in this manner. The story that Mackintosh jilted his boss’s sister is one that is commonly repeated, now taken as rote. According to Roger Billcliffe, it may have initially been told to Mackintosh’s first major biographer, Thomas Howarth, by Francis Newbury’s daughter Mary Newbury Sturrock.  But as he points out in his recent book The Art of the Four, she was ‘not yet born when these events took place and… would have been quoting, or making deductions, from later family discussions.’ (p. 24) He continues: ‘Many years later, in discussions with [me], she modified the word “engagement” to “an understanding”, as close perhaps to a withdrawal of the original suggestion as she was able to make.’ Billcliffe also points to discrepancies in Timothy Neat’s account of events in his book Part Seen, Part Imagined (1994), showing convincingly that the timeline of events, alongside the fact that no formal engagement was announced as would have been appropriate for the social rank of the Keppies, make such an arrangement rather dubious. It is a compelling discussion that filled me with relief to read, as it makes previous interpretations of this ‘Immortals’ photo rather questionable, as I had suspected.

But just in case I was reading my own biased vision into this picture, I decided to do what any contemporary researcher might – I asked the internet! Taking it to my personal Facebook page, I asked friends, without context, how they would characterise the interaction between these two:

There is something “knowing” being shared between them. Her exposed palm is something striking to me in the photo. A softness or bit of connection in that hand. Such a willingness to look at one another….

I have no idea what this photo is, but I am fascinated by it.

That palm forward is an active posture….a choice. It doesn’t represent a body in repose.

I love this and keep coming back to it.

‘Yes! That extended hand can be interpreted in any number of ways. Her face does not add any more. The woman on the far right seems to be . . . Not-having-it. And . . . Why are these two the only ones in a darker color?’

‘The pose looks slightly awkward. The woman on the left looks starry eyed and the other one oblivious. It seems the romantic one is extending her hand to the other. Maybe she took her friend’s hand, maybe not. It’s not clear what’s happening. I get the impression something has been said between them just before the camera shot this.’

I think the one on the left is saying “I told you we couldn’t get out of participating” to the other who is reluctantly amused. The hand proffered to her friend to draw her in to? There is certainly a sense of complicity…

My 2 cents… I see two women sharing a secret that doesn’t require words. There’s a very obvious affection between them.

My first thought was they were more than just friends but after seeing the detailed close up, they seem to be having one of those moments where nonverbal communication shows their friendship. I’d say it says something to the effect, “I told you…” while the other responds, “umhm.”

And of course – I had to get some silliness:

“I told you the invitation said ‘wear something white’!”

And from my very own Auntie Cindy in California:

They’re saying “Can you believe they wore white to BAFTA?”

Chat-up lines… Ah’ thought ah’d hurd them all, but see yon wee nyaff back ther’? He told me he wiz an ‘under-appreciated genius’! Jist fancy that!

-Our own Professor Bruce Peter!

So despite some nonsense – I was happy that so many saw the camaraderie I did, and even though others weren’t sure, no one said they saw it as a purely negative exchange between the women.

It is also important to view this photo in the context of others in the album, and particularly a rather romantic shot of the women from behind, as we imagine them joined together in sororal* affection. They stand in the same order as the other photo – sans Mackintosh – as if they have just turned as one to gaze at the sublime landscape.

And it’s also a divine portrait of their dresses – but that’s a subject for another post!

The rest of the photos show the friends having a wonderful weekend together, and in that context, as well as with a closer examination of the particular photo in question, I do hope that the interpretation that it depicts a ‘frisson’ between Macdonald and Keppie can be laid to rest. It is one of many that show the warmth of friendship this group obviously had. Friendship, and as this image below shows, fun – not without a touch of humour.