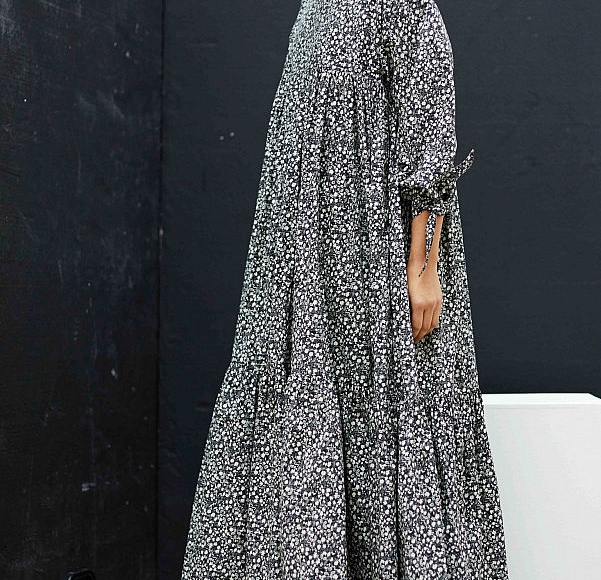 Welcome to a post I started ages ago, and never finished off. So while the inspiration isn’t so ‘timely’, it is still a topic I’ve been stewing on (food pun intended) for some time.

This past Spring saw the very welcome return of The Great British Sewing Bee, which for the uninitiated, follows much the same format at The Great British Bake-Off: 3 challenges (corollaries: signature/pattern, technical/transformation, showstopper/made-to-measure), cheeky banter, and loads of tension. One ‘garment of the week’ (star baker), and one exit. The GBSB week 1 theme was ‘Wardrobe Staples’, and Sewists had 5 hours to create a made-to-measure Buffet Dress. Never heard of that? Me either! While 19th century fashion is my specialty, I’m not usually so switched off. Host Joe Lycett explained:

The loose-fitting Buffet Dress became a monster hit on the high street in 2019, and has since sold in the hundreds of thousands…

One contestant, Cathryn, a postal worker and former dinner lady, was more on trend than I, as she explained: ‘It’s been very popular with those who’ve been having some extra treats and things because we’ve been isolated.’ Cathryn is also, like me, a huge David Bowie fan and has a cat named Ziggy Stardust, so I totally trust her.

But looking at all the patterns, and finished dresses (which I won’t spoil here), it was apparent that a ‘Buffet Dress’ was the same thing as a Maxi Dress. Or possibly a smock. And when I ran shamefully to the internet to try and discern the origins of this tantalising term, I was relieved that many, many other people had never heard of a Buffet Dress before, including the brilliant Deborah Sugg Ryan.

I even asked at a recent 19th Century Dress and Textiles Reframed ‘At Home’ event – a respectable gathering of dress historians from all over the globe – if anyone had heard of a ‘buffet dress’. The response was a resounding no, with one exception of someone from Australia who said it had been a popular beach dress recently. So where does this come from?

This is not the first time in fashion history that a woman’s desire for comfort – and food – has been linked to dress typologies. Tea Gowns were born for just such a purpose. Many dress historians state the Tea Gown became a ‘thing’ in the 1870s, according to popular press. However, its origins are a bit older and murkier than that, inspired by the beauty of highly collectable Chinese robes and Japanese kimnonos, and alongside the Artistic Dress of circles such as the Pattle Sisters. Watts’ Portrait of Sophia Dalrymple (1851) certainly depicts a precursor to a Tea Gown, its loose, unstructured form designed to be worn privately, perhaps during the ‘At Homes’ hosted by Sarah (Pattle) Prinsep’s at Little Holland House in Holland Park, London.

Equally, the dress James McNeil Whistler designed for Symphony in Flesh Colour and Pink, Portrait of Mrs Frances Leyland has been referred to as an example of an early tea gown – though I have questioned whether this dress, in the end, was even ‘real’ (as in, was it assembled in a manner that was robust enough to be worn out in the world, or was it an ensemble of fabric made for modelling?).

Certainly by the end of the 19th century, the tea gown was a popular form of dress amongst those that afford it, as evidenced by examples from Liberty’s catalogues:

Although the Tea Gown continues to be a term for a kind of ‘afternoon’ dress into the 20th century, these earlier draped assemblages were closely linked to the Victorian design movement known as Aestheticism. It was a holistic approach to design, a way of living and life really, that centred on the simple premise that surrounding oneself with beautiful things, including wearing beautiful clothes, showed that one was a beautiful person. On the surface, this sounds rather frivolous, but it was actually a much more nuanced philosophy that such aesthetics were a reflection of one’s interior self – their very soul, in fact. These lofty ideals will be the focus of a different post – I promise! – but to keep on topic, the Tea Gown, simply stated, is the comfortable and beautiful garment one might don for entertaining at home, notably when having companions over for tea. There are numerous extant examples in public collections – particularly as the House of Worth began producing them especially for the American market at the end of the 19th century. Here is a very small Pinterest board with just a few examples:

LATE EDIT: I completely missed that my wonderful friend & colleague Abby Cox did a whole fab video on tea gowns, featuring one from her own collection, a couple months ago! Please take some time to look at this, it’s great stuff!

So if a Tea Gown was a comfortable dress to be worn at home while enjoying one’s tea; the Buffet dress is the comfortable garment to be worn out into the world after you’ve eaten ALL THE THINGS, if the internet and Sewing Bee are to be believed. A search for ‘buffet dress’ now returns a bazillion hits, but one of the the earliest posts I found is from January 2019, which talks about it as if it is already a trend: a loose flowy dress perfect for hiding the hideous pounds one gained on Christmas cheese and chocolate. Because of course, whether being festive or weathering a pandemic, women must always HIDE even a few pounds of weight gain, right?

I don’t mean to be a hypocrite – as a fat woman who grew up in the 70s/80s, I have long been a proponent of roomy clothes. In fact, too loose, too baggy – stuff that might ‘hide’ my shape, but fairly shouts that I’m not happy with my body. I am nearing 50 years on the planet, and only recently have I started to embrace clothes that fit me. But before I digress too far into my own personal history of being uncomfortable in my body, a popular pastime for pretty much every woman alive, my love of ‘flowy’ dresses isn’t solely down to my desire to conceal my form. Equally at play is the the desire for comfort, and the beauty of the fall of fabric. And that’s perhaps why I fell in love with Artistic Dress, particularly in the form of a Tea Gown. The irony of my attraction to food-themed garments is not lost on me, especially as I sit in a cafe writing this while side-eyeing the scones. How nice would it be, though, if we could simply embrace these beautiful dresses for love of form and design, rather than because they hide our curves?

I’ve more to say but as I feel this post is already ‘past its prime’, here is an article on Buffet Dresses from the Telegraph dated 4 July 2021. Given that I started writing this post in April, I’ll take this as a cautionary tale to not let things sit until they go stale – who likes staleness in their teas or buffets after all?

Bonus: if this post made you hungry, please check our my recipes, especially my lovely wonderful scones!